I recorded the first CD Heartsong in San Francisco in Jan of 2007 with a remarkable sound engineer and sound healer. We used the Solfeggio scale tones (an ancient sacred scale used in ancient Gregorian chants, used by many sound healers today) by utilizing specially made tuning forks, accompanied by keyboards. All the songs were improvisations, or “first takes” by both of us. Nothing was rehearsed or added later. The only thing we needed to do out of necessity was to shorten some of the tracks so it would all fit on to 1 CD.

Recorded in 2010, this CD had been long awaited by many who have heard some of these songs in concert. This CD manifested differently than the first, I would wake up in the morning hearing beautiful melodies in my mind, and I was compelled to compose music backgrounds to support them. 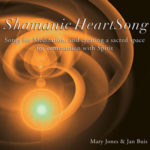 By Mary Jones and Jan Buis. These songs take you on a beautiful musical and vocal Journey through the portal of your heart, creating sacred space for communion with Divine Source.

Mary & Jan met in  2009. Both feeling a deep recognition for each other’s work, and mutual intent to assist all to empower themselves for personal and spiritual growth.
Together we are offering Shamanic Heartsong Vibrational Healing Concerts all over the world.

From the Netherlands: Before he started his career as a musician Jan was working as a social worker. As a gifted therapist he became increasingly aware that music, or rather sound, is a very powerful therapeutic tool. On a cosmic scale, music is a universal force, able to bring about profound changes on many levels (physical, emotional and spiritual).